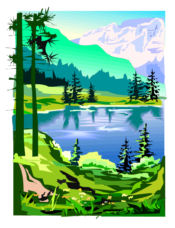 You have come to the right place if you are looking for fun, engaging and exciting Ponds, Rivers and Lake themed activities to do with toddlers, preschoolers and kindergartners. Our activities are used by teachers, moms, dads, child care providers and more!

Jumping Frogs
Take a green circle and fold not quite in half. Don’t fold all the way down. Then add two white ovals for eyes on top of the fold. Add a dot in the middle and for a tongue glue a half-oval shape to the bottom of the top flap. Then add green accordion strips for legs.

Turtle Puppet
Paint a paper plate to resemble a turtle’s top shell and paint another plate for the bottom shell. Staple or glue green construction paper legs on either plate. Sandwich a green sock between the painted plates so that the toe sticks out for the head and the top of the sock sticks out the back for the tail. Staple the two plates together on both sides, add eyes, and slip your hand into the sock.

Paper Bowl Turtles
Turn bowl upside down and paint green, let dry. Cut out front and back feet from brown construction paper. Staple to bowl. Cut out head with neck and draw on face, staple to bowl.

Bobbing Frogs
Take old corks and color them with green crayons. Then take a green pipe cleaner and wrap it around the cork, twist it, then bend the long ends into frog shaped legs. Take your frog in tub, to the lake, or even to the swimming pool.

Children can spread paint onto the items, and use them to make an imprint on the paper. You could do this as a group mural, on a large piece of paper, or as individual projects.

Fill the clear bottle about three quarters full with water. Add a few drops of food coloring. Now add a small quantity of vegetable oil. From the other bottle, cut out fish, turtle or frog shapes, making them small enough to fit into the first bottle. Make balls and other shapes with foil.

Put all these shapes in the oil-and-water bottle. Put the top back on the bottle and secure it with tape and glue to prevent leaks. SHAKE!!

Magnetic Fishing Game
Cut fish shapes and other items like those that could be found in a river, pond, or lake from oak tag or poster board. Glue a large paper clip to each item. You could use a small children’s’ wading pool or some other large container to put these in.

Create a fishing pole out of fat dowel rod and heavy string. Secure a piece of magnet to the end of the string. The children can “fish” for the things in the wading pool.

Sensory Tub Idea
Fill the water table with toy items like those that could be found in a river, pond, or lake– toy fish, snakes, aquatic plants, turtles.

Creative Continents
Using construction paper, cut out a large freehand shape for your continent. Then decorate with blue blobs for lakes and ponds, strips of blue paper, marker or crayon for rivers and streams. You can also add cities, mountains, etc.

Be sure to name everything — Lake Amy, Moonlight Stream, Bateman River, etc.
Display all the continents on a large blue ocean.

Pond Unit Ideas SNAIL
This is a favorite game with very little children. For large numbers, each verse may be repeated as needed to complete the winding or unwinding of the line.

The players all stand in a line holding hands and saying the first verse. They wind up in a spiral, following the leader, who walks in a circle, which grows ever smaller until all are wound up, still holding hands. The leader then turns and unwinds, until all are again in one long line.

Frog Jump
Let the children pretend to be frogs. Have them squat down with their arms straight out in front of them. Then have them jump forward, raising their arms high into the air before returning to a squatting position. Ask them to jump fast, to take big frog jumps, to take a certain number of jumps, to jump slowly and take little frog jumps.

Turtle, Turtle, Frog
Have the children sit in a circle. Pick one child to be the frog. He starts leaping around the outside of the circle tapping each child on the head saying, “Turtle,” to each one. When he gets to the one he wants to chase him, he says, “Frog”. That child gets up and starts leaping after his frog friend, trying to catch him before he gets back to his place.

Leap Frog
Choose several children to be “frogs” leaping over each other as the rest of the “frogs” sun themselves on rocks and chant:
Leap frog, leap frog Easy as can be. I’ll leap frog you, Then you leap frog me.

Little Green Frogs
Have the children pretend to be little green frogs crouched down in the grass. Then recite the rhyme below and have the children take big “frog hops” every time they hear the word “Hop”. When they hear the word “stop” have them stay crouch down without moving. Repeat the rhyme, changing a different “hop” to “stop”.
Little green frog, won’t you Hop – hop – hop?
Little green grog, won’t you Hop – hop – stop?

Disappearing Ducks
Have the children pretend to be little ducks and line up behind you. Lead them around the room and have everyone recite the poem below. Begin the poem with the number of children playing. For six players, start the poem as follows:
Six little ducks went out to play Over the hill and far away. Mother duck said, “Quack, quack, quack, (softly) And five little ducks came waddling back.

As you waddle around the room, go behind a partition (a row of chairs, a table etc). Have the child at the end of the line crouch down behind the partition while the other children continue to follow you. Keep repeating the poem, each time leaving a child behind.

Dunk The Ducks
Fill a soft-sided inflatable wading pool or use a water table with about 3 inches of water and put three or four plastic floating ducks in it. Then fill several squirt bottles with water. Invite the children to use the square bottles to “dunk the ducks.”

Turtle Races
Make three to five turtles and let the children race them. to make cut turtle shapes out of green poster board, number or name each one. Punch a hold just above the center of each turtle and put a five to eight foot long piece of string through it. Get one chair for each turtle. Tie one end of each piece of string to one of the legs of a chair. Line up the chairs along the finish line.

Which turtle made it to the end first? Which one was last? Race again.

Turtle Cookies
Make rolled sugar cookie dough or buy the refrigerated “slice and bake” dough.
Give the children green jelly beans that you have sliced in half horizontally.
Shove them into the dough to make arms, legs and head.
The children shake green sugar on their cookie.
Bake as directed.

Five Little Ducks
Five little ducks went out to play.
Over the pond and far away.
Mother duck called with a quack, quack.
Four little ducks came back, came back.

Frog
Croak said the frog, (Make croaking sound).
With his golden eyes. (Fist up to eyes.)
Sitting on a lily pad, Catching flies. (Grab air with hand.)
I have sticky tongue, (With index finger make darting motion.)
It’s as FAST as can be. I catch the mosquitoes, l-2-3.

The Little White Duck
There’s a little white duck, sitting in the water.

All the little insects sitting by the leaf. They sit by the leaf on the tree. And as they sit by that little green leaf, They’re a happy insect family!