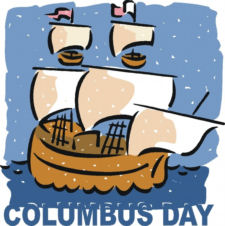 Did you want to do some fun, educational and engaging Columbus Day activities with children?  If so, you have come to the right place!  Our activities are widely used by teachers, moms, dads, child care providers etc. for learning and teaching while being fun for the kids!

Find activities for all ages including toddlers, preschoolers and kindergartners.  All our activities are available at no cost and are free to print and share.

Many countries in the New World and elsewhere celebrate the anniversary of Christopher Columbus’s arrival in the Americas, which occurred on October 12, 1492 in the Julian calendar and October 21, 1492 in the modern Gregorian calendar, as an official holiday. The day is celebrated as Columbus Day in the United States, as Día de la Raza (Day of the Race) in many countries in Latin America, as Día de las Culturas (Day of the Cultures) in Costa Rica, as Discovery Day in The Bahamas, as Día de la Hispanidad (Hispanic Day) and National Day in Spain, and as Día de la Resistencia Indígena (Day of Indigenous Resistance) in Venezuela.

Mayflower Ships
Give each child a walnut shell half, a small piece of playdough, a toothpick and a small square of white paper for a sail. Let the kids decorate their sails with crayons. Help each child punch holes in his or her sail. Show the child how to stick his or her toothpick in one hole and out the other hole.Hve the kids roll the playdough into a ball and place in the bottom of the walnut shell.. Then stick the toothpick in the playdough.

Columbus’s Voyage
Trace Colmbus’s journey from Spain to San Salvador on a globe. It was a long tiresome journey for the 100 sailors of the nina, pinta, and Santa Maria. Weeks passed with no sight of land. The food, water, and supplies were almost gone. Most of the sailors were restless and wanted to turn back. Columbus cheered them by talking about the riches they would find into the Indies. Finally signs of land appeared. Branches with green leaves and red berries floated past the ships. They then saw in the distance LAND! Sailing closer, sandy beaches and green forests appeared. Columbus and the sailors thought they had arrived in India, but actually
they had discovered America! Dramatize the voyage.

Watch For Something New
Sit in circle. Discuss that sailors were on a ship for many days with nothing to see but water and sky. They were constantly watching for something different. Observe everyone in the circle: what they are wearing, how they are sitting, and where they are sitting. Place head in lap and close eyes. Adult changes something in the circle. Open eyes. What is different? Variation: Every day for a week take a walk or look out the same window. Discuss observations that were not noticed the previous day.

Art
Each child needs a clean, empty baby food jar (the small size), some blue Play doh, a toothpick, a small triangular shaped piece of paper and one half of a walnut (shell). Have the children squish the play doh inside the lid of the jar (this is the “water”). Press the nut into the play doh (this is the boat). Press a little more play doh into the shell.

Stand the toothpick up in the play doh (you may need to break the toothpick to make it shorter). Have each child write his/her name on the paper (the “sail”) and glue or Tape it onto the toothpick. Screw on the jar and stand it lid side down – voila! A sailboat!

Clothespin Sailboat
Need: spring type clothespins, toothpicks, white paper, glue or glue sticks, scissors, markers
Remove the hinges from the clothespins. Cut a 2 1/2 in. square of paper. Glue the flat pieces of the clothespins together, leaving a hole at one end. Insert the toothpick into the paper forming a “sail”. Put glue into the hole and inset the toothpick, & let dry.

What to Do:
1. Have the children paint the sides of the milk carton red and the toilet paper tube black. Add some white glue to the red paint to help it adhere to the milk carton.
2. Before the paint dries, the children can add black circles to the sides of the boat, three to a side. They will stick without gluing when glue is already in paint.
3. Push the tube onto the boat center. Pull and stretch the cotton ball glue to the top of the tube.
After boats dry attach and string and use in water.

Carpet Boating
Materials needed:
Carpet squares or a towels on a clean floor.
What to do:
1. Have the children put the carpet on the floor with the carpet side down (slides better.)
2. Have them sit on the carpet piece with their feet extended out in front and their knees bent.
3. Explain how they can pull themselves forward with their feet. Have them work their arms as if they are rowing a boat.
4. Sing ‘Row, row, row your boat.’
More to do: Have the children kneel on the carpet and pull themselves forward (scooter style), or have them put their hands on the carpet and run pushing carpet on the floor.

Yacht
Show children a picture of a yacht. Ask if they know what this type of boat is called. Explain that a yacht is used for racing and for pleasure. Make a yacht pattern from tagboard. Help the children trace around the pattern on yellow construction paper. Invite them to cut out their yachts and add circles for the portholes with black crayon. The children may then want to paint blue water on a large sheet of white construction paper. When the paint is dry have the children glue their yachts on the paper

APPLE SAILBOAT SNACK
The children make apple sailboats from an apple slice, a triangular piece of cheese, & a toothpick. Eat for snack.

Utensils: knife and cutting board, bowl, fork, toothpicks for mast, scissors, paper for sails, tape
Process- Peel the hard-boiled eggs. Discard shells or save for another art idea, such as eggshell mosaics. Cut the eggs in half. Remove the yolks and place them in a bowl. Mash the yolks with 1 teaspoon mayonnaise and 1/2 teaspoon mustard. Mound the mixture back into the egg white sections. Decorate the egg sections with the celery sticks, carrot sticks and chopped pimentos. Cut the paper into sails, attach to the toothpicks with tape and put into eggs. Place the lettuce on a serving plate, then put the eggs on top of the lettuce.

Columbus Sailed The Ocean
(sung to “Pop! Goes the Weasel”)
All around the great wide world,
Columbus sailed the ocean
To prove the world was big & round
That’s real devotion!

When You Sailed Our Way
(sung to “Sailing,Sailing”)
Columbus,Columbus,sailed across the sea,
And found a very special land
That belongs to you & me.
Columbus,Columbus,we celebrate your day,
In fourteen hundred & ninety-two
When you sailed our way.

Sway to the music as song is sung.