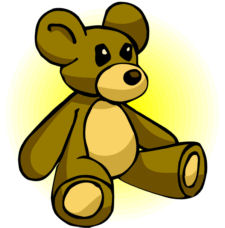 You have come to the right place if you are looking for fun, engaging and exciting Teddy Bear themed activities to do with toddlers, preschoolers and kindergartners. Our activities are used by teachers, moms, dads, child care providers and more!

Instructions:
1) Mix sugar and cinnamon
2) Have older children cut out bear shape
3) Children can place glue anywhere on the bear and add cinnamon and sugar mixture
4) Glue poem to middle of bear so they can share with their parents

Teddy Bear Visitors
For Bear day bring teddy bears from home. Have all the kids make up a story with their bear as the main character and then type and print for them. Watch all the Winnie the Pooh’s that you have and read some Berenstein Bear books and some Little Bear books. For crafts make some paper bears and glue them to craft sticks and have a puppet show with them.

Teddy Bear Tea Party
Each child brings their favorite bear (or stuffed animal) and has a tea party. Have play dishes, cups and saucers for the bears and the bears sit at the little table. The kids serve their bears pretend tea and cookies.

Then the children ages 2 to 4 go to the “big” table and have cookies and apple juice (their tea). You can print off a paper place mat with a picture of a bear for the place mat and have them color it when they are done eating.

Quick & Easy
A week before you start this theme send home an invitation to each child inviting their favorite teddy.
Read stories about teddy bears.
Dress up clothes for the teddy bears (good for fine motor skills).
Take pictures of the children and their teddies put pictures in album to share with parents.
Let the children act out the story were going on a bear hunt.
Use a large blanket or table cloth to make a cave and pretend your bears.
Don’t forget the three bears story. Let the kids try porridge.
Bear lacing cards.
Plastic bears in the sand and or water table.

The Three Bear Family
First get a refrigerator or wash machine box and cut off one of the sides. Then on the center piece cut a peaked roof and a window on each of the sides. It’s no longer a complete box but an opened up “U” shape. The kids can get on both sides of it and paint it using bright colors. When this is dry, use it as kind of a back drop for the house.

The kids can build beds, chairs, and a table using the hollow blocks – good math activity trying to figure out the different size beds: if we use two blocks for the baby bed, how many for mom’s and dad’s? Same thing with the chairs.

You can provide pillows and blankets, and: a baby bonnet for baby bear, an apron and hat for mama bear, a tie and hat for papa bear, a dress and barrette with yellow curls for Goldilocks, a giant bowl, middle sized bowl and baby bowl, a giant wooden spoon (the kind that hangs on the wall – a thrift store find), a tablespoon and a baby spoon. Then enact the play.

Teddy Bear Poster
When the children bring their bears help the children trace around them onto a large piece of paper. The children then color them to look like their teddies and to the side of these drawings write these sentences:
My bear’s name is ________.
______ is ________inches long. (together use a ruler to measure teddy)
________came to live with me when_____________. (the story of where bear came from)
__________ and I like to ______________. (what the child likes to do with teddy)
The children can fill in the lines with help or you can fill in the lines for them. The sentences can be changed to any topic that might capture the interest of children.

Bear Sorting
Ask the children to sort the teddy bears by categories (size, color, those wearing bows, etc.) Then count the number in each category. Also, let the children come up with ideas for categories. Talk about more and less.

Weighty Bears
Review the concepts of heavy and light by having one child at a time hold a different teddy bear in each hand. Which bear feels heavier? Which feels lighter? Provide a balance scale to compare the weights of different bears.

Graham Grid
Each child gets assortment of Teddy Bear Grahams and grid paper to make graph (& then eat!)

Bear Awards
Teacher decides on award after looking at each teddy, awards are given with description written on it. For example: Tallest Bear, Purple-est Bear, Silliest Bear, Bear with the Biggest nose, Most Hugged Bear, etc.

Estimation Station
Fill a container with Teddy Grahams and have each child guess the number of crackers.

Healthy bear Check Ups (a certificate is given out to each bear signed by a B.D. *bear doctor!*)
The B.D.’s check the bears with stethoscopes, blood pressure cuffs, tongue depressors. If the bears have an ailment, they put a Band-Aid or some gauze on it to make it better. The doctors prescribe Bear Hug’s twice daily and lots of bed rest with the owner.

Sometimes the bears have to have an x-ray. You can get some old x-ray film and cut out teddy bear shapes from that. To check their eyes, put patches (with a paw print on the front) over the bear’s eye and have them read which way the paw pointed (up, down, left, right). Then because the sun is so bright, have paper sunglasses taped to the bear.

This is also a great time to learn about healthy bear snacks and exercises.

Sandpaper Cinnamon Bears
Glue sandpaper to tag board and then cut out bear shapes. Give the children cinnamon sticks and let them rub the sticks on the sandpaper. The bears will smell like cinnamon!