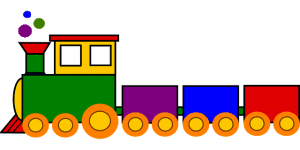 You have come to the right place if you are looking for fun, engaging and exciting Train themed activities to do with toddlers, preschoolers and kindergartners. Our activities are widely used by teachers, moms, dads, child care providers and more!

Shoe Box Trains
Have children paint and decorate shoe boxes. Add two wheels on each side of each shoe box. String them together. Sort toy trains by type, color, size, etc. Sort pictures (stickers on cards) of trains.

Cut the bottom of an egg carton in half lengthwise and give one half to each child. Have each child glue a toilet paper tube on top of their first egg cup and a spool on top of their last. Have them paint the spool and the adjourning egg cup red, this is the caboose.

Have them paint the rest of the egg carton black and let dry. Using the small paper cup, trace ten circles on the black construction paper. Cut these out to be wheels. Glue five wheels on each side of the the train.

Write the numerals 1, 2, 3, 4, 5 on each car and the words first, second, third, fourth, fifth on each, respectively. Have the children try to arrange the railroad cars in order on another sheet of paper and paste them in place when they are correctly laid out.

Encourage verbalization of the names of the ordinal positions while the children work. Use this activity to reinforce counting as well. Let the children imagine a very. long train and ask, “How many cars can you count?”

Model
Build a village with mountains and tunnels, etc. with blocks.

Train Cars
Use one large cardboard box per child. Cut top and bottom off. Make shoulder straps from heavy ribbon. Let them paint their own train cars. Use small
painted paper plates for the wheels. Line them up and let them march and sing “Workin’ on the railroad.”

Big Trains
Make train cars out of shoe boxes and lots of other “stuff.” Take cardboard boxes (1/2) and cut a hole out of the top (enough to put it over the child’s head – resting on their shoulders). Have the kids paint and decorate them. You can even put black construction paper wheels on the side, then put crape paper to sting them together. The kids love to “BE” trains. We sing songs and walk through the neighborhood.

Milk Carton Caboose
Rinse out milk carton (pint, quart, or half gallon). Press the top flap down and tape shut. Use white paper and tape to wrap the carton. Cut four circles from cardboard and cover the circles with foil. Glue these onto the sides of the carton for wheels. Use markers to add windows and doors to the train.

Creative Movement
Sing “Little Red Caboose” as you have the children hold onto each other’s waists and choo-choo around the room.

Dramatic Play
Arrange 1 chair per child in a curvy line. Have children sit in chairs and tell them train is about to leave. Blow a whistle calling “All aboard! Train is leaving!” Sing:

Pretend to move with the train as it runs on the tracks. As the train goes uphill, lean back and chug slowly. As it goes downhill, lean forward and chug slowly. On the curvy track, lean left or right. On the bouncy track, bounce up and down and make the chug-g-g bounce too.

Dramatic Play
Line chairs up and play “train”. Make tickets and have someone collect them. Ask all the children where they are going and why.

Show and Tell
Ask the children to bring a train set from home.

Dress-up
Have the children come to school in striped shirts (like conductors).

Zoo Train
Make a Zoo Train out of small milk carton or other boxes. Label the cars #1, #2, etc. and put one animal in car #1, two in car #2, and so on. For homework, have the children each bring in a box car of a train & something for it to carry. Then, hook the train up (I used strings with paper clips
tied at each end) and have the children chant “I think I can” while you pull the train. Sing Hap Palmer’s song, “Clickity Clack” substituting the items that the children put in their box cars in the appropriate place. 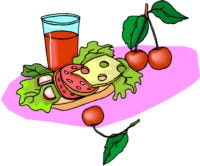 Twinkie Trains
Take one twinkie and 6 vanilla wafers. Use those decorator gels in the tubes(or you can use cream cheese to glue the wheels on) and have the kids decorate the twinkies then “glue” the wheels on the sides. Use a marshmallow for the smoke stack.

Marshmallow Trains
Use pretzel sticks to hook the “cars” together and use peanut butter to glue cheerios on as wheels and other features.

Little Red Train
Little red train,
Chugging down the track,
First it goes down,
Then it comes back.
(chug around room by yourself)
Hooking on cars

Here Comes The Choo Choo Train
Here comes our choo choo train
Coming down the track
First it’s going forward
Then it’s going back
Hear the bells ringing, ding a ling, ding a ling
Hear the whistle blowing, woo woo
What a lot of noise it makes
Everywhere it goes!

Down By the Station
Down by the station early in the morning
See the little puffer bellies all in a row
See the station master pull the little handle
Chug chug, choo choo, here we go!

The Train
Choo, choo, choo (slide hands together)
The train runs down the track (run fingers down arm)
And then it runs right back. ( Run fingers up arm.)

This is a Choo Choo Train
This is a choo choo train (Child becomes a train by squatting)
Puffing down the track (Child does actions that the rhyme states)
Now its going forward, (child goes forward)
Now its going back. (Child goes back, etc.)
Now the bell is ringing (child pulls make believe bell rope)
What a lot of noise it makes cover ears and make train noises
Everywhere it goes. (Children move around the room at random.)

As it Goes
As it goes,
Little red train
Just grows and grows.
(have one child hook on behind you)
(repleat until all children are part of the train.)

The Peanut Song
Oh, the peanut sat on the railroad track,
His heart was all a flutter.
The choo-choo train came down the track,
Toot, tooot, peanut butter.

Little Red Train
Everyone sits and waits at the train station. One person begins by pretending to be the engine. They walk about the room as everyone chants:

The “engine” calls for a “car” to hook on. Repeat the chant. The second
person calls a third to hook on. Continue until everyone has completed
the train.

Zoo Train
Line up in a row in to form a train. One child is the engineer.
SING: (Tune: Down By the Station)
Down by the Zoo Train
Next to the zoo
On came an animal
Do you know who?

The engineer says an animal…such as “A Kangaroo came and it was hopping.”

Thank you so much for the fun train themed rhymes and action songs! I am an art teacher about to start a train project based on Donald Crews’s ‘Freight Train’, and I’m excited to add some song and movement to my lesson. Thanks!