When a child finds a new interest, it’s always fun to be able to explore it with them, and present them with the tools to dig deeper and learn more. If you know a kid who has expressed an interest in elephants, or animals in general, you’ll find this page very helpful! We’ve curated a collection of fifteen interesting and fun facts about elephants for kids, along with further reading, sources, and references for you!

1. There are two types of elephants found in the world

You can tell these species of elephants apart from their size and ears. Asian Elephants are smaller than African Elephants with smaller, less pronounced ears. 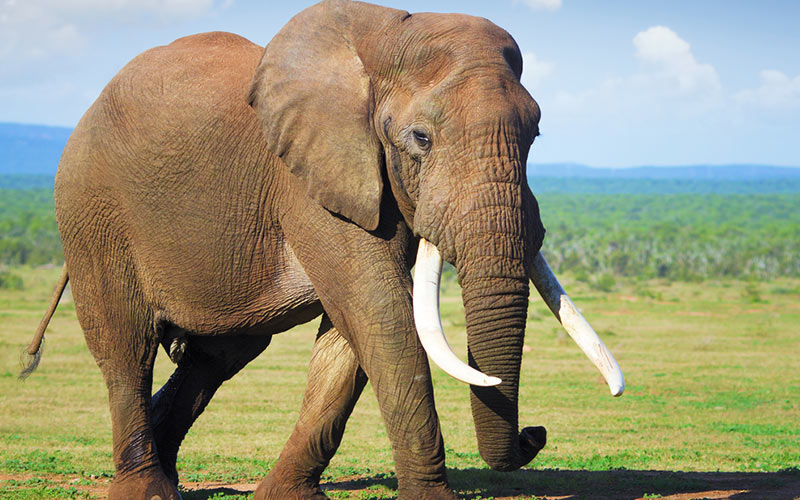 The only living mammal larger than an Elephant is the Blue Whale, found in the Pacific, Antarctic, and Atlantic oceans.

Unlike the cute depictions in television shows and movies, elephants don’t have the ability to jump. Now, this fact might not come as much as a surprise due to their large size, but there are other reasons why elephants can’t jump besides the obvious.

Most animals that jump do so out of necessity, whether it is to gather food or escape from predators. Luckily, for our elephant friends, their large size makes them a threat to most would-be predators, and food is easily accessible to them.

Another reason why elephants can’t jump is due to their bone structure. Unlike our bones, the bones in an elephant’s legs are only pointed downward, removing the necessary “spring” required to jump into the air. 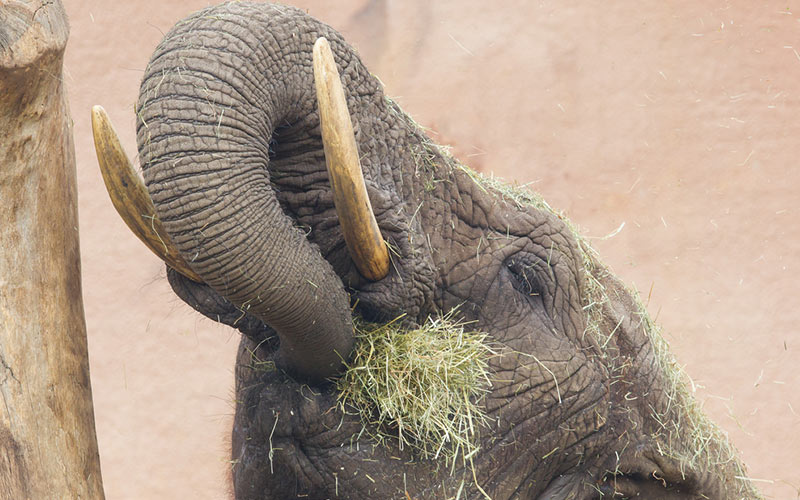 Elephants are herbivores, which means they only eat plants. They are also one of the largest animals in the world, so it might not come as a surprise to you that they spend most of their day eating. It takes a lot of fuel to power such a large and powerful creature, and that means they have to eat a lot of plants to fill up. Imagine eating a bowl of plain greens as your meal, it would have to be such a huge bowl to fill you up, now imagine you’re as big as an elephant!

Some of an elephant’s favorite foods are bamboo, flowers, fruits, grasses, leaves, twigs, seeds, and herbs. This is an opportunity to ask the child what their favorite foods are, how much of that food they would eat if they were an elephant, and other fun and creative things to think about.

5. Elephants travel in a herd 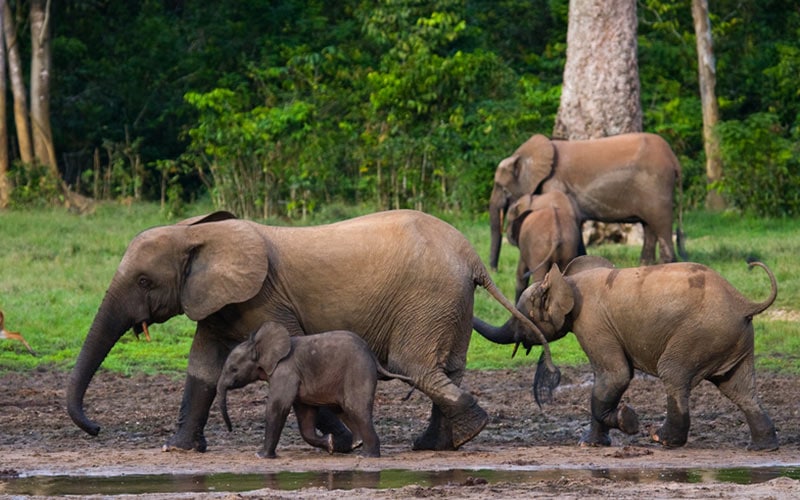 Close relationships and family ties are important for elephants, just like they are for people like us! Female elephants travel in groups called herds that range in size from 8 to 100 elephants. The elephants in a herd are members of the same family, and the oldest is the leader.

Male elephants leave the herd between 12 to 15 years of age and live alone or with other male elephants.

6. Elephants can communicate with each other over far distances 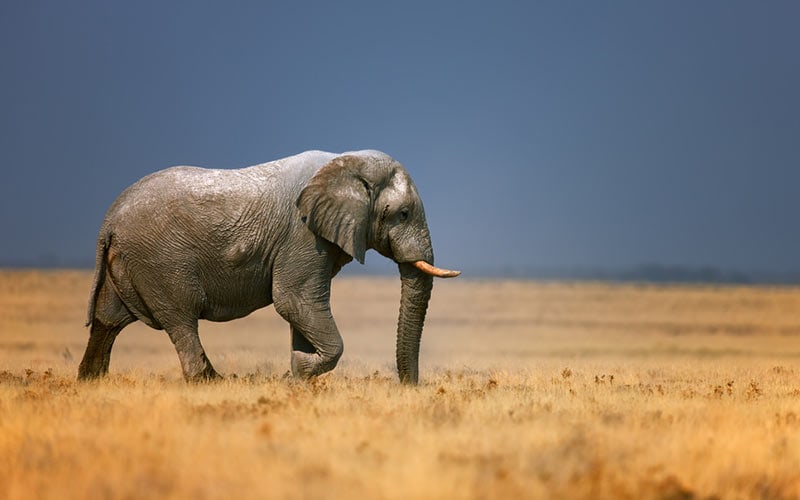 Elephants communicate to each other using a variety of sounds. These sounds include crying, roaring, snorting, and even rumbling. Elephants are known for having great hearing, allowing them to communicate and hear each other from up to 5 miles away. That type of hearing can come in handy when you’re wandering around from your friends!

They do this by using the sensitive nerves in their feet to hear sound vibrations as they travel through the ground at a volume only elephants can hear. When you think of how big they are, it makes sense that they would be able to create such deep sounds that can vibrate the ground, but it’s also incredible to think about! It’s like they’re a living subwoofer, good thing they aren’t your neighbors!

Extra: Can you think of a landmark that’s around 5 miles away from where you are? It can help to contextualize that distance for children.

7. Elephants can live to be 70 years old

When left in their natural habitat with plenty of food, water, and low amounts of stress, elephants are known to live as long as 70 years of age.  This is not far from our life expectancy as humans.

Like with humans and other animals, there are factors that contribute to a shorter lifespan. Some factors affecting elephants are not enough sources of food or water, illness, and illegal hunting. It helps that they’re able to fend off most predators, unfortunately illegal poaching has had a very negative impact on the numbers of elephants in the wild.

8. Elephants can use their trunks to breathe underwater 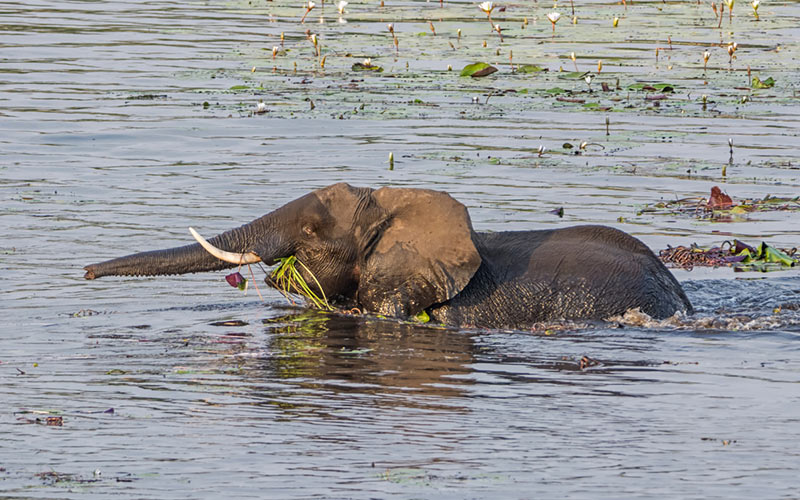 It might surprise you to learn that elephants are naturally great swimmers. Their large size allows them to float with ease and they can swim long distances thanks to the use of their trunk.

Useful for other tasks like eating, picking up objects, and drinking water, elephants can also use their trunk as a snorkel for breathing while swimming completely submerged. Elephants are known to love water and will spend hours swimming to keep cool and search for new areas of land. 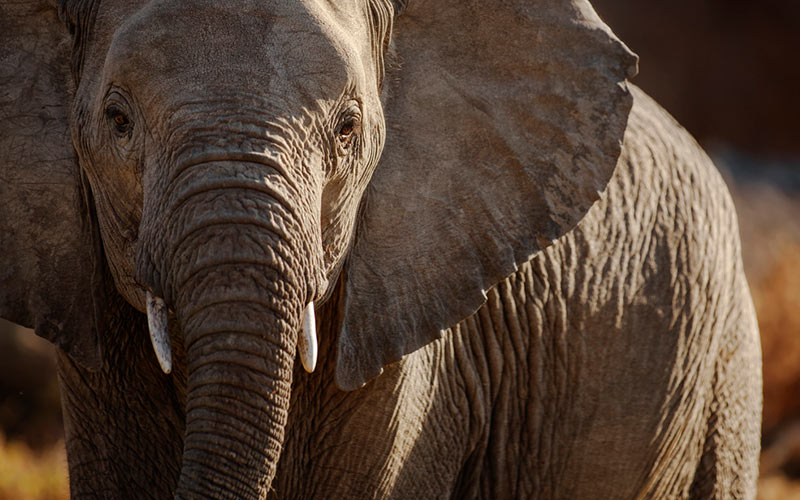 This might sound unbelievable, but take a look at this real-life example that took place in 1999 at The Elephant Sanctuary located in Hohenwald, Tennessee.

When a new Asian Elephant named Shirley arrived at the sanctuary, it didn’t take long for employees to notice the excitement in Jenny, an African Elephant. Employees were stumped because it was not the response you’d expect when introducing new elephants. Surprising to everyone involved, a search into the background of both elephants discovered that they briefly performed at the same circus together 23 years earlier. How crazy is that?

10. Female elephants are pregnant for 2 years 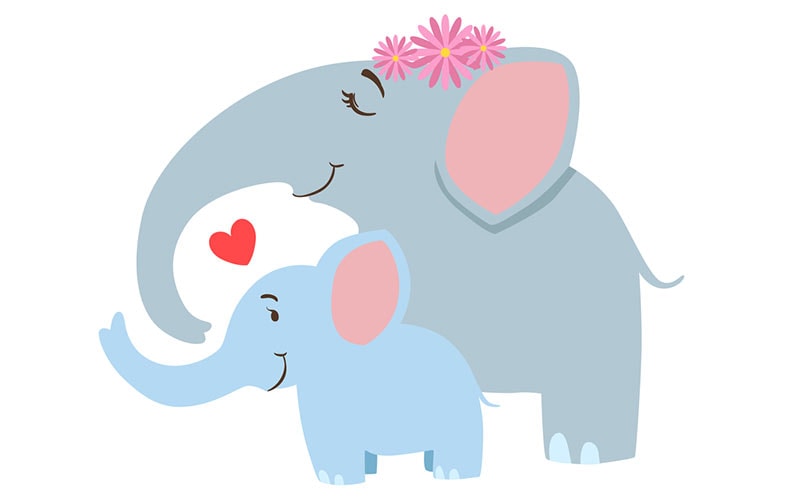 A baby elephant weighs between 200 and 300 pounds at birth, so it’s easy to see why they take so much longer than any other mammal to fully develop. Additionally, unlike human babies, baby elephants are born with almost fully developed brains. This gives them the knowledge to walk, eat on their own, and understand their role in the herd shortly after birth. 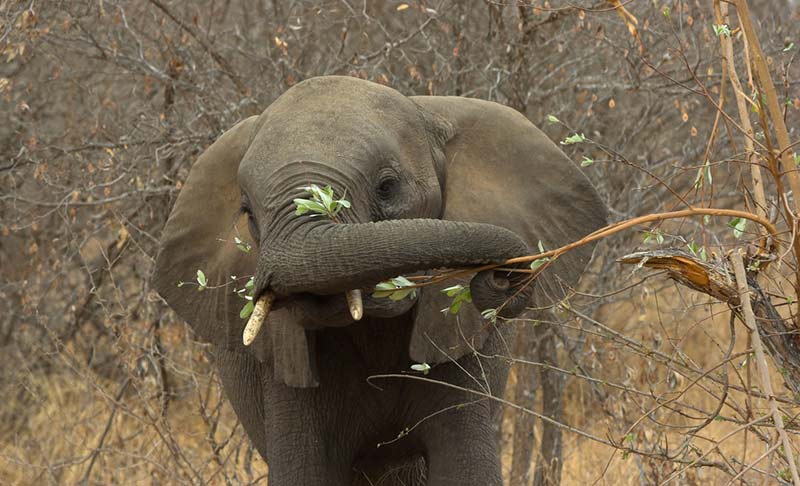 Elephants usually fall within the range of 5,000 and 14,000 pounds when fully grown, so it might not come as a surprise that they consume such a large quantity of food. Their large body mass isn’t the only reason an elephant eats so much food, though!

Poor digestion is also to blame, as elephants can only digest (make use of) 40% of the food they eat.  They need to eat larger quantities of food to make up any energy or nutrients lost from a previous meal. Remember when we talked about how much time they spend eating? Now you know why it takes them so long!

12. Along with their large food consumption, elephants drink 30-50 gallons of water per day 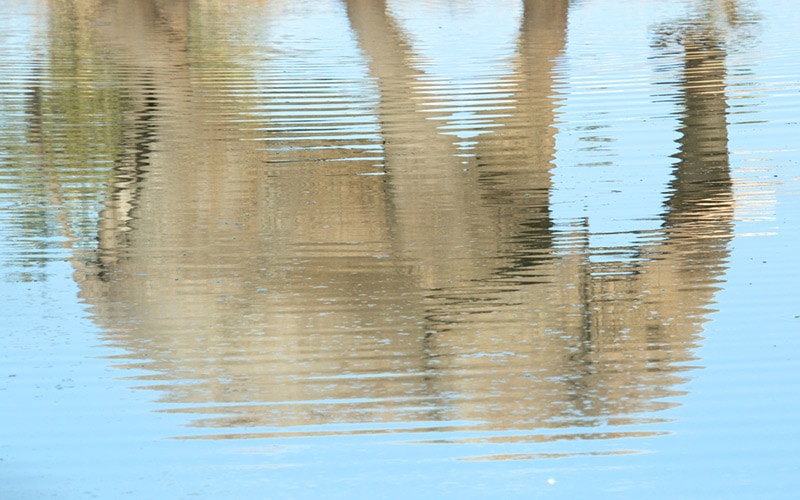 Water is essential in an elephant’s daily life for hydration, cooling off, bathing, and even play time. Water consumption also plays an important role in successful digestion, so it’s no wonder why an animal as large as an elephant can drink so much water!

If you need help visualizing 50 gallons of water, it would be like drinking 12 ½ big jugs of milk, or almost a bathtub full.

13. Elephants use mud as sunscreen 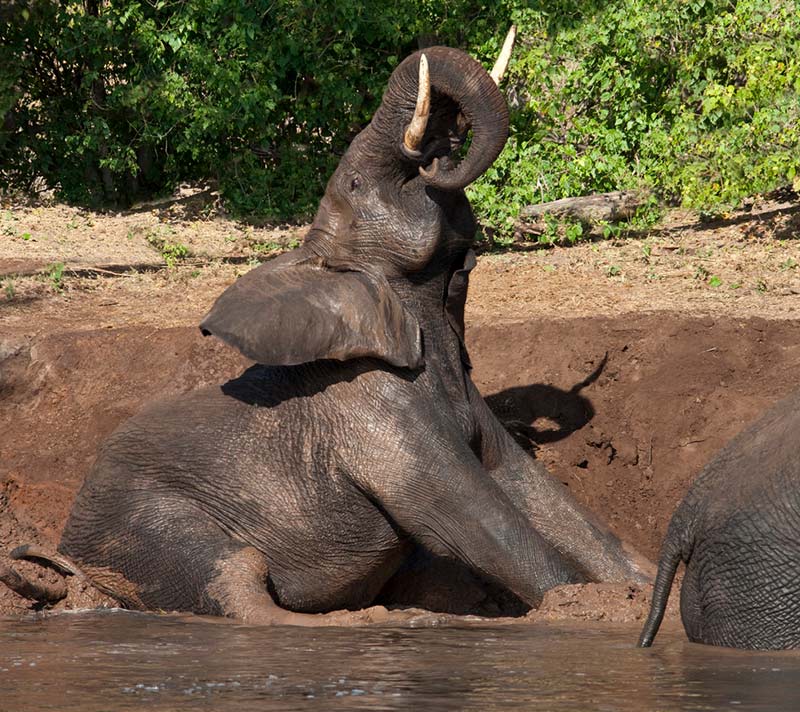 Sun safety is just as important for elephants as it is for us. Coppertone might not make sunscreen for elephants, but luckily, they are resourceful animals and use something else that is readily available to them – mud!

An elephant will slather themselves in mud by using their trunk to spray it over their body or by bathing in it. Mud doubles as protection against ticks and other bugs too!

14. Elephants are afraid of bees 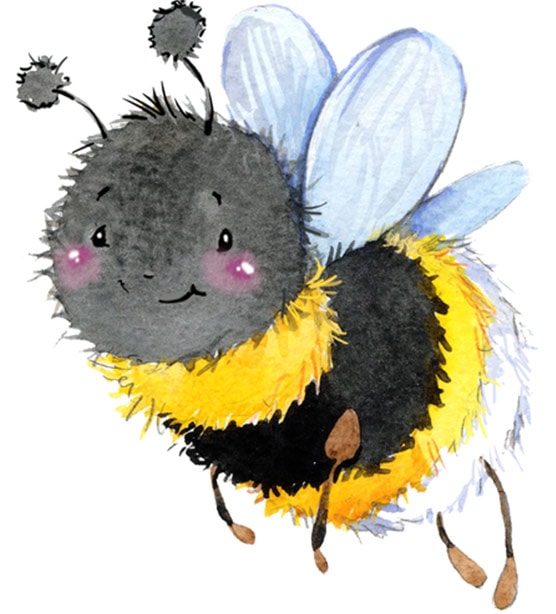 It’s hard to imagine an animal as large as an elephant being afraid of anything, but it’s true – elephants are afraid of bees.

Elephants show their discomfort around bees by flapping their ears, kicking up dust, making noises, or running away when they hear the buzzing of a hive nearby. The fear is so strong that African farmers have started to keep beehives near their crops to keep elephants out.

15. Humans are an elephant’s strongest predator 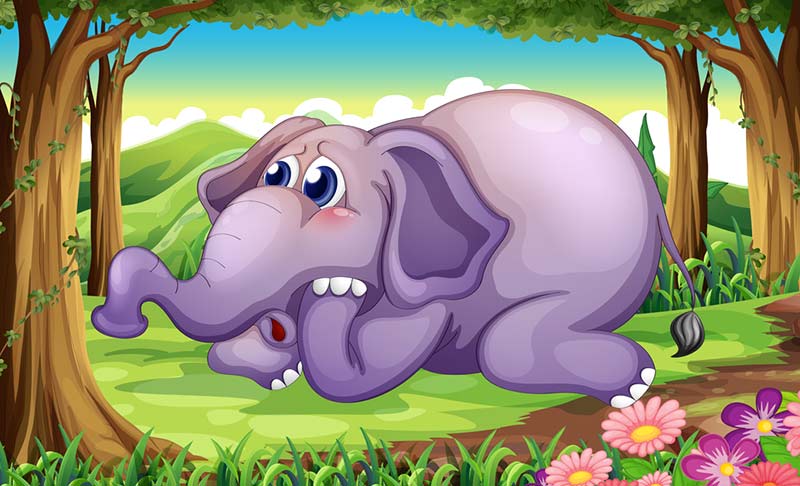 With the exception of weakened or young elephants becoming prey to lions and other strong predators in the wild, they are known to have no natural enemies. In other words, most other animals respect and like the elephants…

Unfortunately, the strongest threat to an elephant is a human. Many elephants have lost their lives to senseless hunting in the name of the ivory trade. Over time, elephants have become a protected species with restrictions against the production of ivory. This hasn’t completely eliminated the senseless violence against these gorgeous and important creatures, but it has been reduced greatly.

Note: Depending on the age and maturity of your child, you may want to leave out this last fact. It’s heavy, sad and upsetting, but it’s also a very teachable moment if you’re prepared for that conversation.

Elephants are an important creature, and they need our help to thrive around the world. Things have shifted in recent years, with an informed public being less interested in ivory or circus elephants that are treated very poorly. Still, there’s a lot of work to do, and it all begins with education!