Toucans are most familiar as one of the characters from the Lion King – or maybe, you just have to look on your nearest box of cereal for Toucan Sam to think of what the average toucan looks like. But there’s a lot more to know about this type of bird!

Here are some of the most interesting toucan facts for kids. 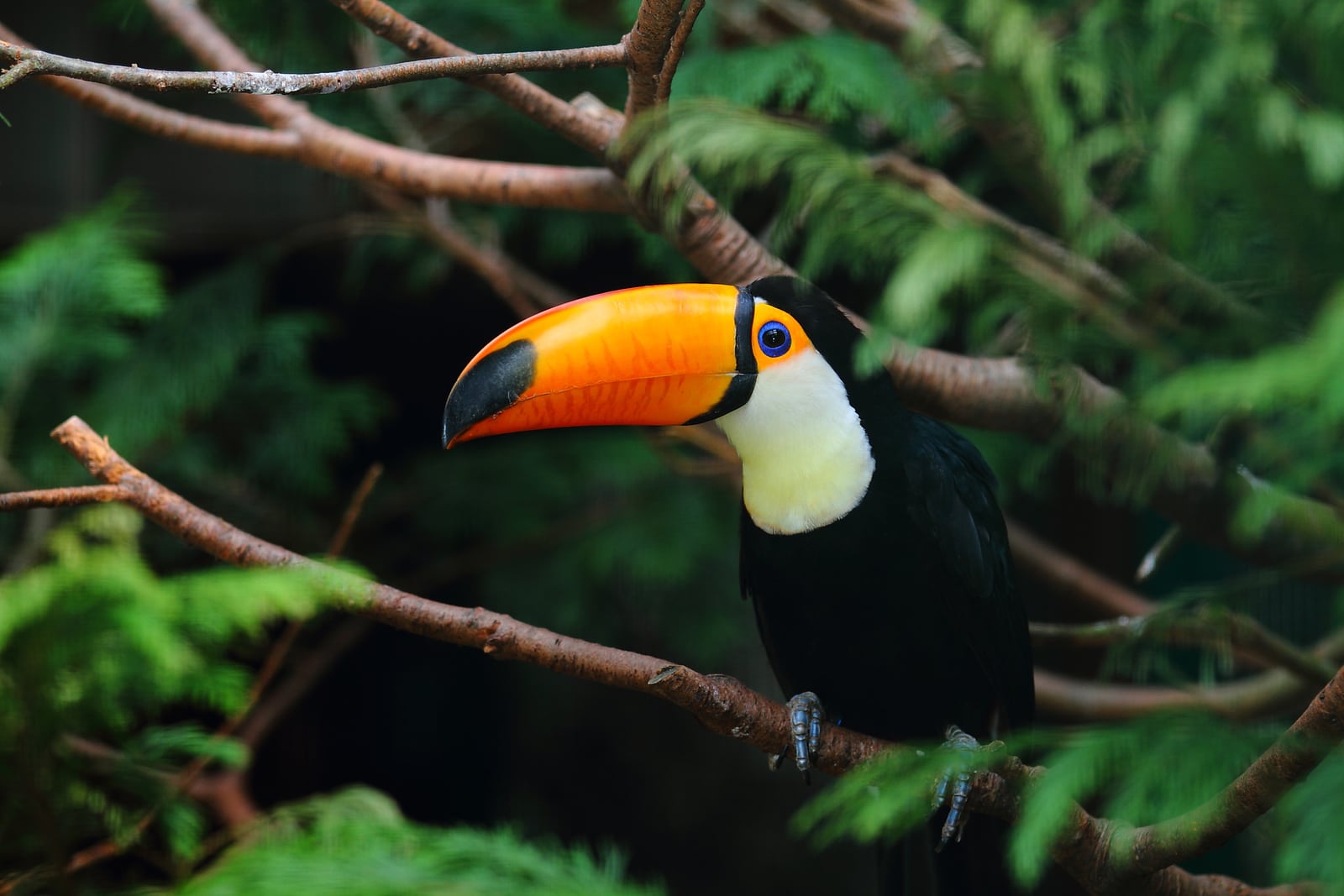 Most people already know what the average toucan looks like, thanks to the popular depiction of a toucan in The Lion King – and the fact that Toucan Sam happens to be one of the most popular cereal mascots of all time!

Most toucans are green, with blue markings – and one of the easiest ways to spot a toucan is by looking at its bill.

Toucans have a very long, elegant bill that can be up to half the size of their entire bodies.

The bill is one of the features that stands out most on a toucan, and this is because the beak fulfills many functions – including to help them hunt and crack open seeds.

There are several different toucans species, including the Choco Toucan which has variations on the markings and looks a little different than the Toco – the toucan species that most people imagine when they think of a toucan at all.

Toucans are bright, and you wouldn’t have trouble spotting a toucan even from very far away. This is why toucans are some of the most well known birds in the world – and if you ever see a toucan anywhere that isn’t a cereal box, you would be extremely lucky!

There’s one more thing you should know about a toucan’s beak: the unusually large beak of the toucan is how they regulate their body temperature – and when there’s adjustment needed, a toucan can change the flow to their beak.

How Did the Toucan Get Its Name?

The toucan bird is name from the traditional Tupi language word “tukana”, which is believed to have eventually been adapted into Portuguese – and then into common language use for this type of bird species.

The tukana-family of birds includes toucans, but also a type of bird called the aracaris.

It is believed that the word tukana, sometimes tucano, is derived from an approximation of the sound of the toucan bird’s call.

Basically, a toucan is named after the sound it makes – or at least, what people used to think they sound like.

What Do Toucans Eat and Drink?

In zoos and conservation areas, there are some toucans who have more of a diet to choose from – one that is selected by expert veterinarians, which gives the captive toucan a slightly more varied diet.

The short answer is yes, toucans have the ability to fly.

The longer answer is that just because toucans can fly, it does not make them very good fliers.

Toucans do not typically fly over long distances, because they are not great long-distance fliers. Over short distances – for example, to make it from one tree to the next – toucans are considered birds of flight. 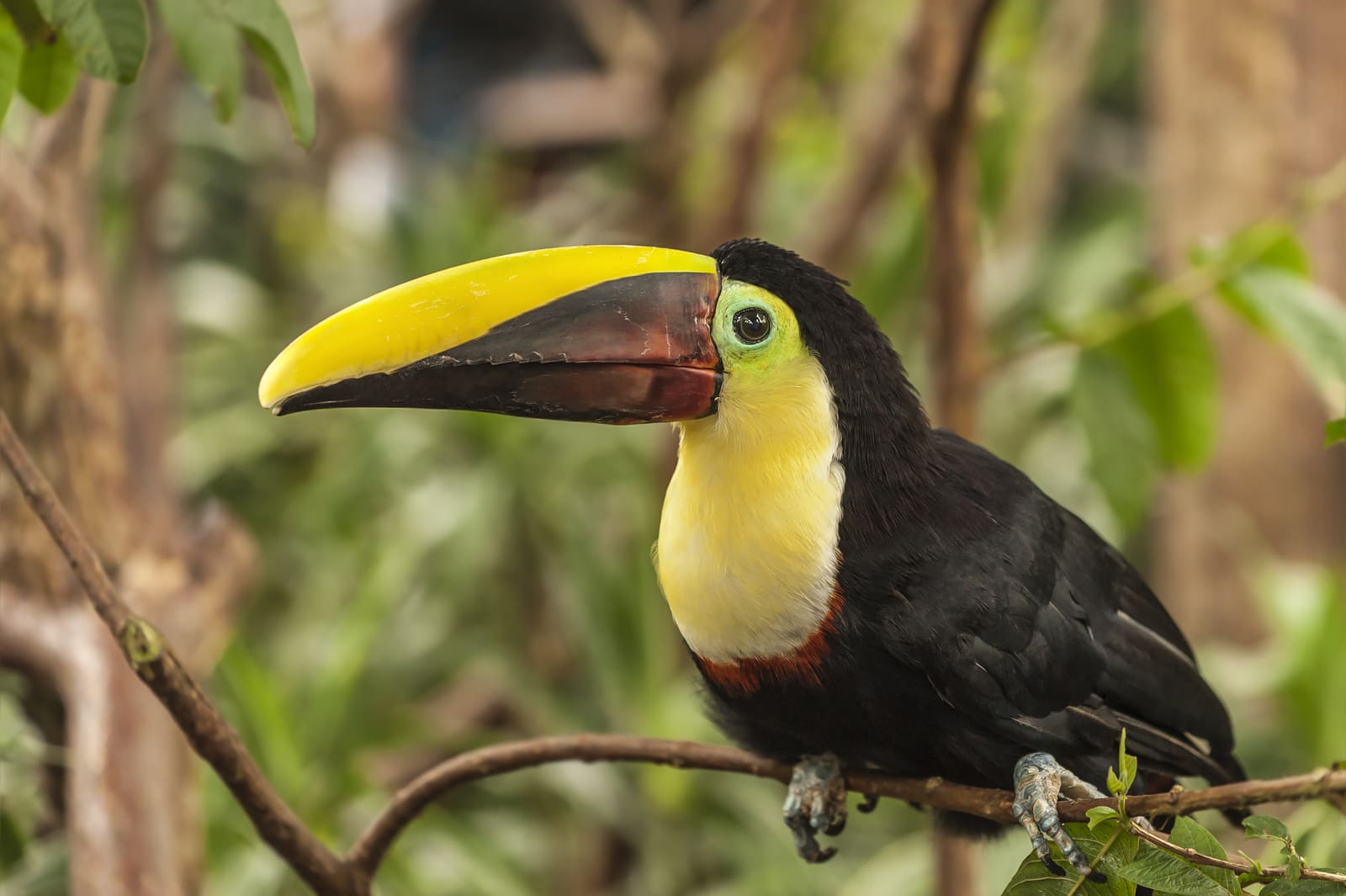 How Fast Can a Toucan Fly?

Surprisingly, a toucan can fly extremely fast – and they can easily reach speeds of up to 39 miles per hour or more. More or less, this distance is the average speed limit!

Where Do Toucans Live?

All over the world, though particularly in subtropical and tropical environments.

The toucan is likely to be found in Mexico and Argentina, though occur in some other subtropical climates too. Some of the toucan species can also be found surrounding the Andes mountain range.

How Long Does a Toucan Live?

It depends on the species!

The average toucan might live anything from 10 to 20 years in the wild, and slightly longer when they are found in captivity due to the lack of natural predators.

What Are Toucan Babies Called?

There are two possible things you might call a baby toucan bird.

As a general bird term, baby toucans might be called chicks – but sometimes, they are also referred to as fledglings.

The answer is yes, and this is true for a lot of different birds and mammals – including cats, dogs, mice and toucans!

Fledglings or chicks are blind when they are born, and they have no feathers yet. Feathers (and proper eyesight) are things that they will only develop later.