Are you looking for some fun puns to tell around the dinner table? These spaghetti and pasta puns, jokes, and one-liners are hilarious!

We have to stick together!

Like unrinsed spaghetti, the family has to stick together.

How are things spaghetti-ng on?

What did the spaghetti say after falling off the plate?

Did you hear about the guy who ate a tin of Alphabet spaghetti and had diarrhea?

Did you hear about the terrorists who planted bombs in cans of Alphabet Spaghetti?

Experts say that it could spell disaster if detonated.

What do you call spaghetti that likes sleeping around?

What do you call spaghetti that acts phony?

What’s so great about an ouija board using Alphabeti spaghetti?

Did you hear about the woman who bet $15 her husband couldn’t build a car out of spaghetti?

You should have seen the look on her face when he drove pasta.

Where do spaghetti and sauce decide to go dancing?

At the meat ball.

You know what they say about cold spaghetti.

Those who forget the pasta are doomed to reheat it.

Did you hear about the chef who made carb-free, gluten-free, sodium-free spaghetti last night?

It wasn’t real food. It was an impasta.

Why was the spaghetti feeling so sad?

Because her husband pasta way.

What kind of pasta do they make from horses?

What do you call it when you apostate from the church of the Flying Spaghetti Monster?

There’s no way anyone makes spaghetti better than my Mother.

Do cannibals eat spaghetti with their fingers?

No. They eat fingers by themselves.

What happens if you eat too many spaghetti-o’s?

You have a disruptive vowel movement.

What’s the difference between regular and cauliflower spaghetti?

Cauliflower spaghetti is the impasta.

Did you know you can use a piece of dry spaghetti to light a candle?

Isn’t that using your noodle!

What do you call it when Bigfoot makes pasta?

How can you tell if the spaghetti is off?

What did the man say when the waiter served him dry spaghetti?

What is murder by spaghetti?

What do you call a snake suffering from amnesia?

What do you call a Pastafarian church?

What’s the difference between a girl and boy spaghetti?

What’s the difference between my ex-girlfriend and a bowl of hot spaghetti?

The spaghetti wiggles when I eat it.

How do you put a bowl of spaghetti to sleep?

Cover it in peanut butter.

Why don’t Italians use BBQs?

Because the spaghetti falls through the grill.

How do you film a spaghetti western?

Put KFC into the Bolognese.

What did Bob Marley scream after finding hair in his spaghetti?

What do you call Jamaicans that don’t like being around spaghetti?

What did Obi-Wan say after seeing Luke Skywalker eat spaghetti with his hands?

What do you call the women in an Italian strip club?

What do spaghetti and women have in common?

They both wiggle a lot when you start eating them. 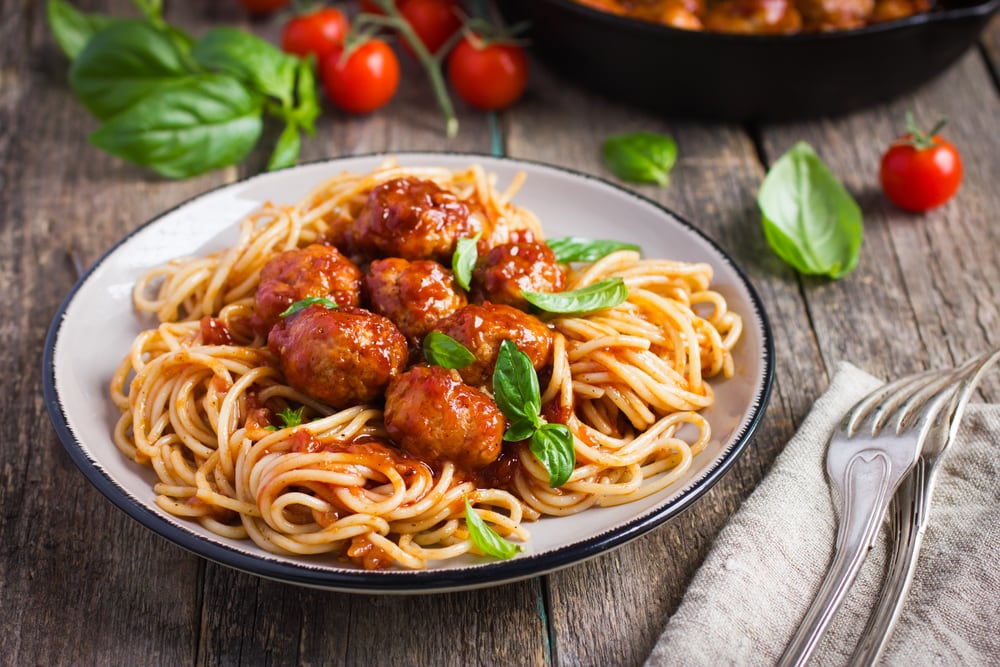 One night, a penne, macaroni, and a spaghetti were drinking in a bar.

They saw a noodle sitting by itself and discussed whether they should invite it over.

They all agreed it looked Cannelloni.

A couple sitting at a restaurant was getting impatient, waiting for their meal.

The man caught their waiter’s attention and asked, “How long will it be for my spaghetti?”

The waiter replied, “I don’t know. We don’t measure it.”

I was eating at an Italian restaurant when the waiter brought me spaghetti.

The waiter asked, “Would you like parmesan cheese with your meal?”

Do you remember the couple the waiter made eat spaghetti with a spoon?

They complained to the restaurant owner, but she didn’t give a fork.

A North American Moose walks into a pizza parlor and sits at an empty table while he waits for the waiter.

The waiter hands it the menu, and the moose reviews it for a bit.

He’s not in the mood for pizza, so he narrows it down to the pasta menu.

When the moose is ready to order, he calls for the waiter.

The waiter asks what he wants, and the moose hesitates for a moment.

The waiter looks at the moose with a startled expression and says, “What was that?”

The waiter is baffled and doesn’t know how to reply.

Frustrated, the moose brings his leg onto the table to point at what he wants on the menu.

“Sir, you don’t have fingers. I can’t tell what you want.”

“Just bring me the damn spaghetti,” the moose replies.

We went pasta huge roundabout, then, suddenly, we got lost.

The boat pasta-nder a bridge.

The pasta-bilities for this are endless.

He’s pasta than a bolt of lightning.

I went pasta nice restaurant on my way here.

Absolutely, pasta-tively I would do it.

I wouldn’t put it pasta to do something stupid.