Cows are one of the most common farmed animals in the world, and they’re also the source of most of the world’s milk – with goat’s milk being a close second on the list. Cows are great! Did you know that cows can walk up steps, but not down? Did you know that a cow’s spots are individual, and no two of them are alike? 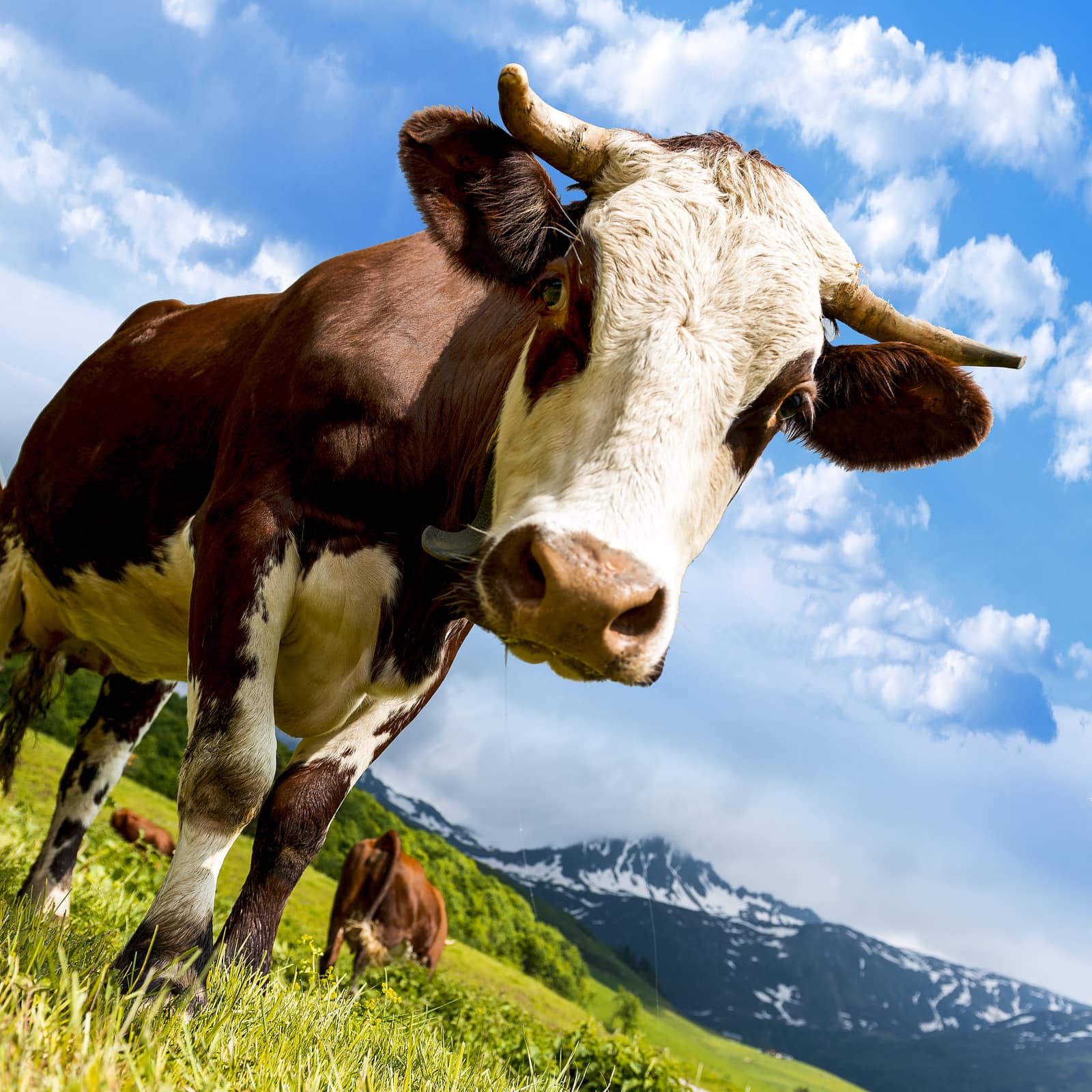 What is Special About a Cow?

A lot of things!

As an animal, cows have one feature that sets them apart from most other mammals. Cows have a stomach with four different chambers, where most types of organisms have only one stomach which food would go to.

Cows are special because of this four-chambered stomach, which they use to digest their food, mostly grass.

But there’s more to it. Cows are also considered a special animal in many world religions, including Hinduism, for whom cows are considered a sacred representation of the Gods. In other cultures, cows represent life and the cycle of birth.

One of the most common worldwide names for dairy cows is Daisy. All over the world, thousands of farmers name their cows the same thing – just like there might be a thousand other people in the world who share your first name!

Cows who are used for milking have to eat a lot of food to continue producing milk. The average active dairy cow will consume as much as 100 pounds of feed every day to stay healthy.

Cows actually have very strong jaw muscles, and it’s guessed that the average cow can chew about 50 to 60 times per minute. That’s almost one chew per second! Nom, nom, nom…

The average dairy cow produces about 35 to 40 pints of milk each day. That’s more than the average household can consume in a day, which is how people discovered they could make so many other products (like cheese) with their extra milk.

Cute Facts About Cows for Kids

According to the history books, the first cow that ever set foot in the United States would arrive in the year 1611. We have used cows in industry and agriculture ever since!

Cows sure do get up and down a whole lot! The average cow can stand up and get back down about 15 times per day. Just like us, cows will sit down when they feel like they need a little rest.

The average lifespan of a cow can be about 20 years, sometimes more.

Cows have the ability to go up steps, but can’t walk down the same way. Cows don’t have knees that bend in the same way ours do, and this has led to some very interesting situations (and a couple of stuck cows).

Cows have extremely sharp senses. In addition to being able to see very well, cows can smell things up to six miles or more away from them. Can you imagine that a cow would be able to smell you cutting an onion six miles away from them?

Scientists studying cows at the University of British Columbia have found that cows experience emotion very similar to the way humans do. Cows can feel happy or sad, and research says that cows can even miss their owners.

Cow patterns are as unique as the patterns that you would see on a leopard, a zebra or a snowflake. No two of them are exactly the same!

Death by lightning is extremely unlikely. What does this have to do with cows? More people are killed in the world every year in accidents that involve cows than by lightning. 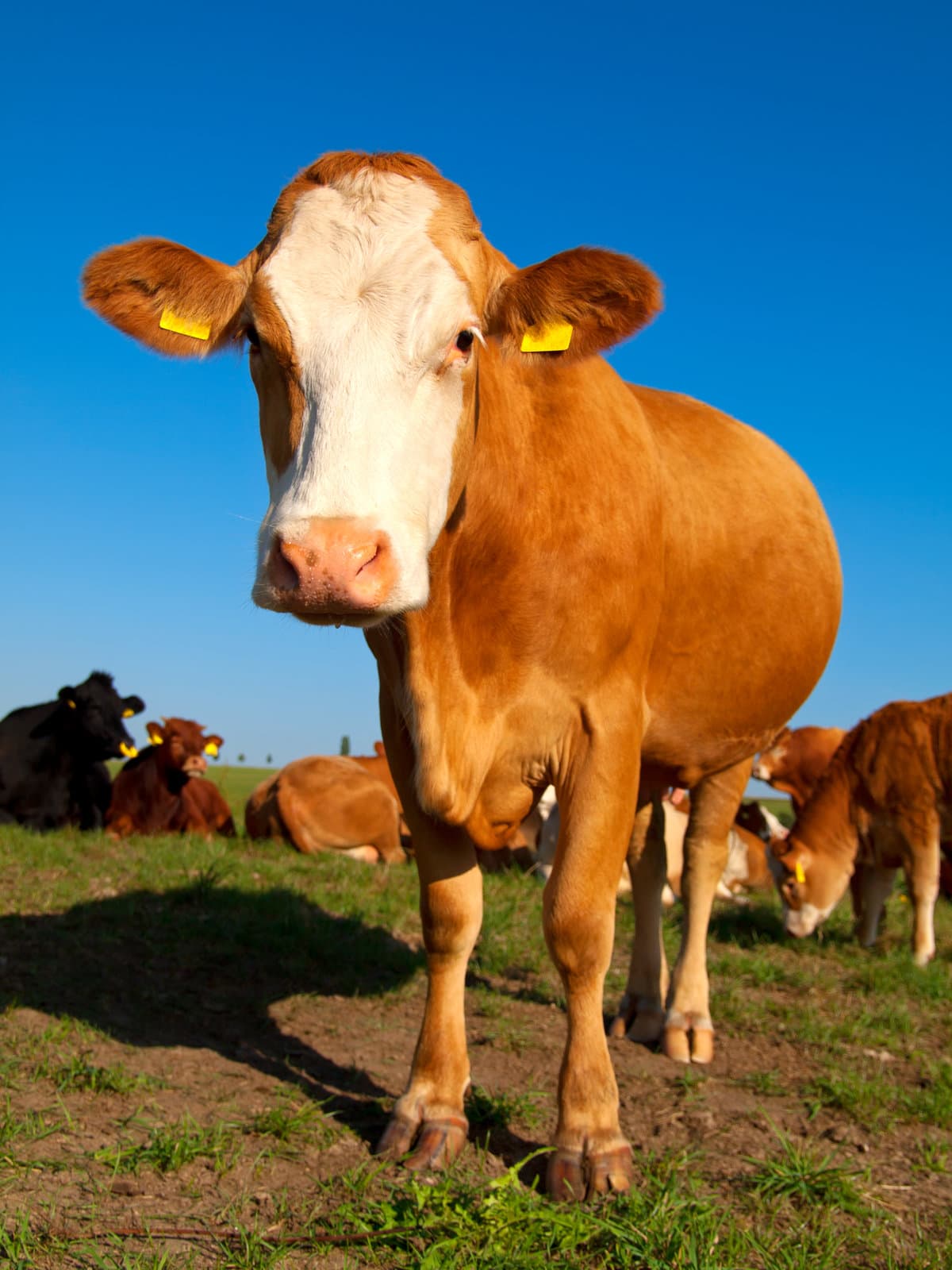 Cows aren’t found in the wild today like earlier ancestors of the common cow would have been thousands of years ago. Today, most cows live on farms where they are used for grazing purposes or milk production.

A cow can adapt to almost any environment, as long as they are given enough access to enough grass to graze. Consider that an active cow will eat more than 100 pounds of grass per day, and imagine the size of that field!

Cows typically graze in a rotational pattern, and are never taken back to the exact same spot to graze there twice. This is done so that the grass has time to grow back, and that the phenomenon we know as overgrazing does not damage the soil.

Cows will carry their young for nine months before birth, just like people.

Most cows only give birth to one baby at a time, but triplets and twins can happen too.

A baby cow is called a calf.

In the dairy industry, cows usually don’t become older than five years due to being slaughtered for their meat.

Cows can cry when they are in distress.

Statistics say that more than 20 million cows are slaughtered every year.

Slaughtered beef has to be tested for the presence of mad cow disease, but a lot of the world’s isn’t.