Here are some of the most interest and mind-blowing chimpanzee facts for kids. 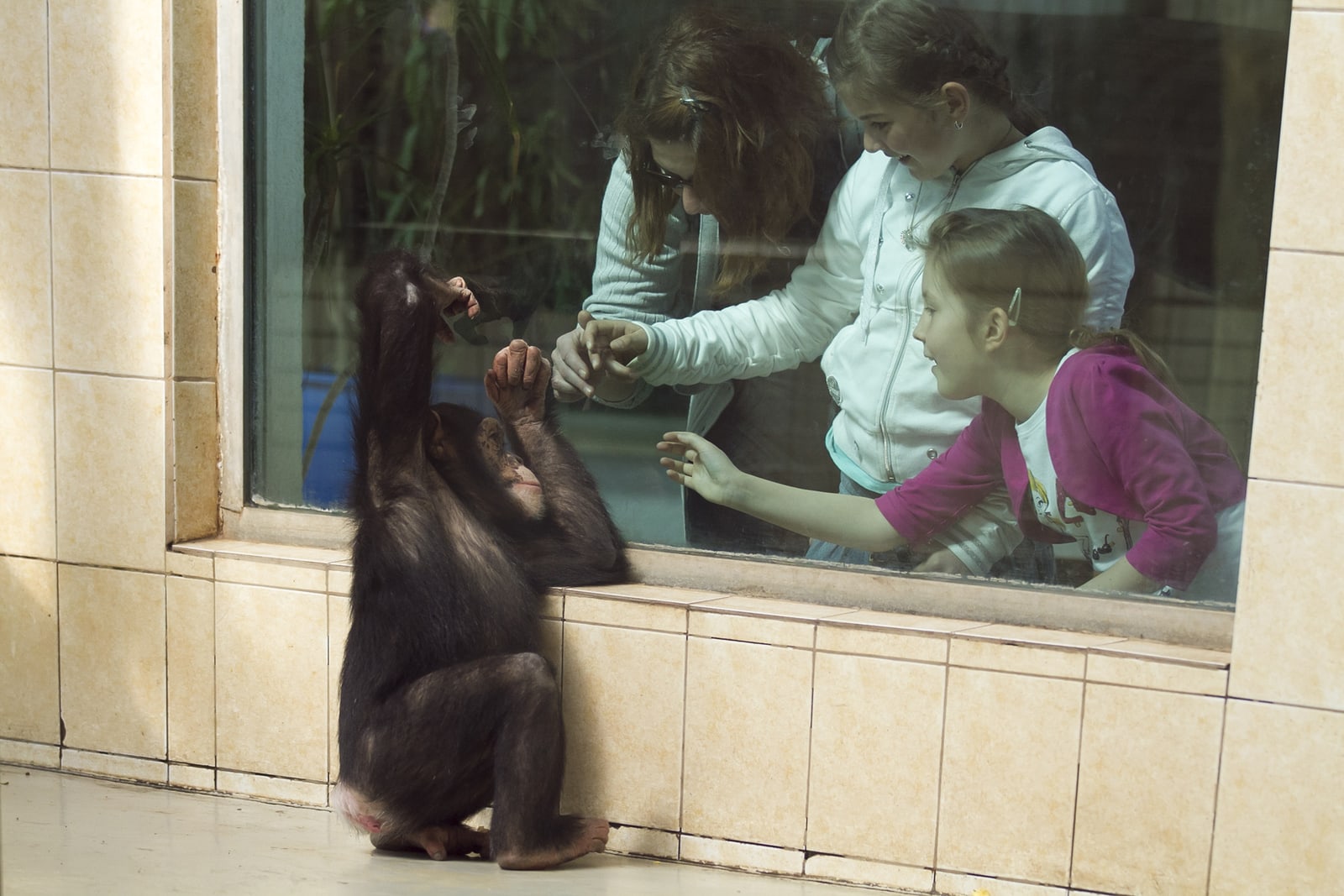 Where Do Chimpanzees Live?

When in its natural habitat, the wild chimpanzee lives almost exclusively in West and Central Africa. Forests and jungles are the most likely habitats where you would see a wild chimpanzee and their families.

Unfortunately, chimpanzees are also illegally kept as pets by many people all over the world. Animal rights organizations and rehabilitation hubs are trying to reduce this number.

What Do Chimpanzees Eat?

Chimpanzees are technically omnivorous and will occasionally munch on small bugs that they find in nature, but the main part of their diet consists of the fruits, leaves, seeds and flowers that they find near their homes.

According to WildChimps.org, this is the scientifically calculated diet of the average wild chimpanzee:

How Strong is a Chimpanzee Compared to Humans?

Chimpanzees are much smaller than humans are, and the average chimpanzee only measures about four feet. For their size, chimpanzees have incredible muscle strength – and one of the most important things you should know about chimpanzees is that they can be extremely strong, much stronger than humans.

According to ABC News, the estimated strength of an average chimpanzee outmatches a human approximately four times.

It means that one chimpanzee is about as strong than four humans combined.

Chimpanzees can be more than just strong, their speed also gives them an advantage above the average human. https://abcnews.go.com/Health/Wellness/chimpanzees-humans-sizing-strength/ 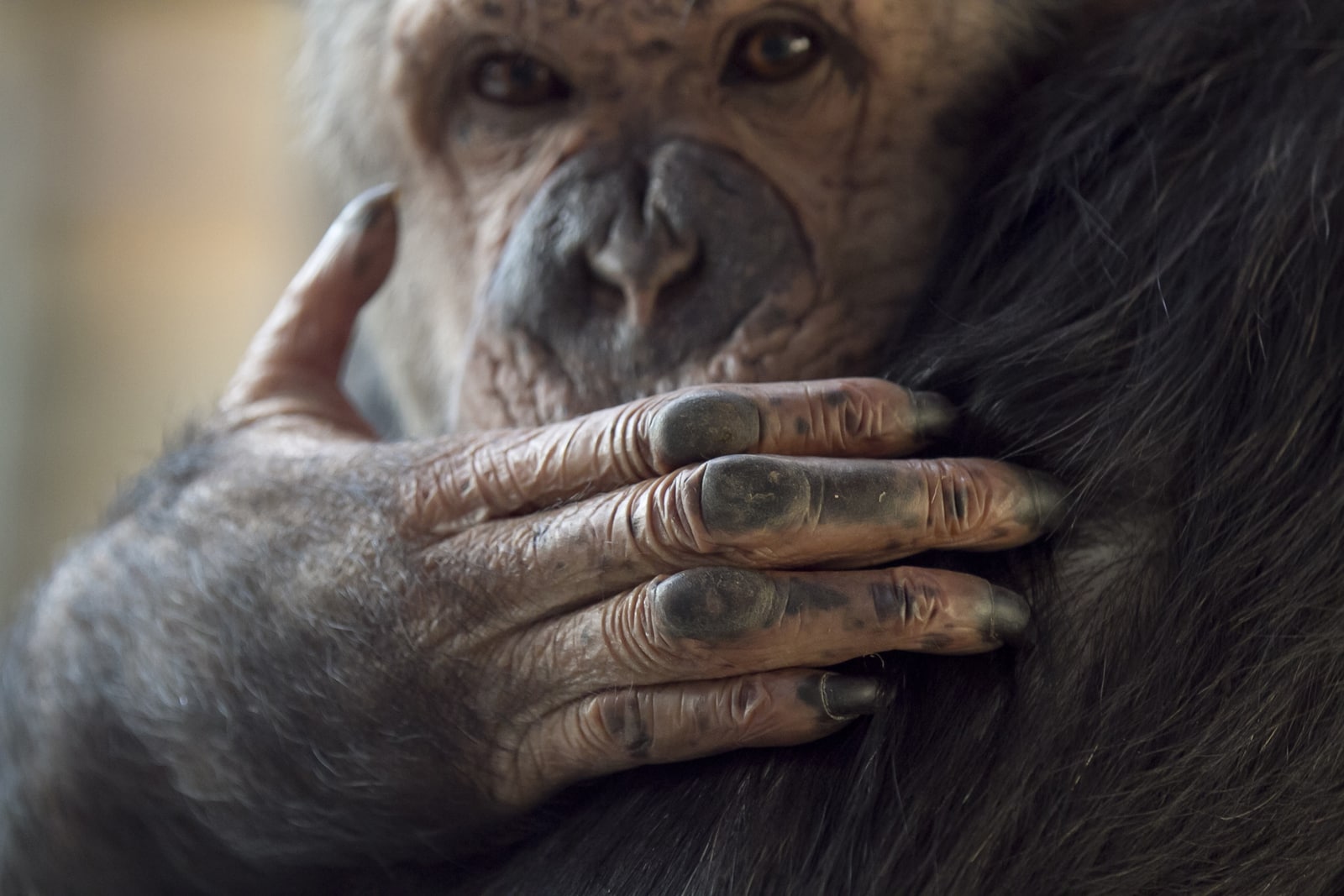 While chimpanzees can look very friendly, an angry or irritated chimpanzee can be extremely dangerous. Chimpanzees in pain might also react by lashing out at people.

Chimpanzees are territorial in nature, and they will attack any other chimpanzee that comes near their territory.

A chimpanzee could attack a human if they are angered, provoked, scared, or in pain.

Chimpanzees kept as illegal “pets” never become fully domesticated (or tame), and they are known to eventually turn aggressive on their human owners. Always close to their natural behavior, scientists believe that chimpanzees cannot be fully tamed in the same way as dogs or cats.

How Long Do Chimpanzees Live?

According to most of the data scientists have about chimpanzees, the average chimp can live about 40 to 50 years. Because they are genetically so close to humans, they have a longer mammalian lifespan than some other mammals – such as mice, who don’t live nearly as long.

How long do chimpanzees live? (chimpsnw.org)

If you have ever wondered about the longest recorded lifespan, there’s a chimp that has lived for more than 70 years!

The oldest chimpanzee that has been recorded in captivity is Little Mama, whose age was measured at 77 in the year 2017. Her original age was determined by the famous scientist Dr Jane Gooddall when the chimp was aged around 30 to 35. Little Mama had been  brought to the park as a chimp that had originally traveled as part of a variety show.

Other Fun Facts About Chimpanzees

Chimpanzees aren’t solitary animals, and most wild chimpanzees live in small family groups. Males will eventually move away from their parents, and might start their own group. These groups are called communities.

Chimpanzees have one feature that most other mammals don’t, but that they share with us humans: thumbs. The way in which we are able to use our thumbs is similar to the way a chimp can bend and move their thumbs around. This gives them an advantage.

Chimps have shown signs of tool usage. When a chimp uses a stick to poke at anything, they are showing tool use – and using an object to achieve a goal. For scientists, this is one way in which the intelligence (or thought process) of animals in the wild can be measured.

Chimpanzees have a reputation for being extremely aggressive when they feel threatened. They are also very territorial, and they are known to fight with other males of their species for food, family or space.

It is a very bad idea to keep chimpanzees as pets. Even when they might look friendly, most chimpanzees remain close to their wild nature and will eventually attack their human owners.

Adult chimpanzees are shorter than you would think, and they measure only about four feet in height.